ST. ANDREW'S, THE HOME OF

St. Andrew’s School inspires young people age 3 through grade 12 to go beyond each day in the classroom, on the playing field, and in the spot light. We offer rigorous academics, amazing arts, and exciting athletics along with a commitment to community engagement. The best way to learn more about St. Andrew’s is to visit campus and see for yourself why we were voted the Best Private School in the area. 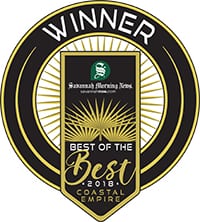 Being a St. Andrew’s Lion is simply just awesome

“Being a St. Andrew’s Lion is simply just awesome. Every single student gets to play a sport or participate in a production if they want to. St. Andrew’s is a special school because of its ability to not only develop their student’s skills, but to make them feel as if they are stars.”

“St. Andrew’s has teachers that are genuinely interested in their students and with the small class sizes they can challenge students  no matter their strengths or weaknesses.”

Whatever they want to be

“I love St. Andrew’s because a student can be whatever they want to be. Whether interested in academics, sports, clubs, performing, art, technology, or whatever, they can participate at almost any level.”
– Parent of ’17, ’19, and ’23

In 1974, the governing board of Independent Presbyterian Church saw a need for another quality college preparatory school in Savannah. A site was secured on Wilmington Island. The church relinquished ownership of the school so that it could become an independent, nonprofit institution. However, the newly formed board of trustees held dear the traditional Scottish values of community, hard work and high standards.

One important part of being in a clan is taking part in our annual Scottish Games day, where clans compete in a variety of events. Striving to win the coveted first place award is a thrill and honor that every member, young, old and in-between can take part in, aspire to and celebrate. Within the clans, we pair our older students with our youngest, so our lower school students have a buddy during Scottish games day and other planned events during the school year when the partners interact and share experiences. Our youngest students look up to their “grown up” counterparts, and our upper school students are true role models to the little ones. Games include the sheaf toss, caber toss, tug-of-war and other physical activities.

Every member of the St. Andrew’s community becomes part of a Scottish Clan upon arrival. These six clans provide a large, extended family with a common bond. Each group, identified by their name and tartan, has a distinguished history.

originated outside Scotland. Early records show the name is written as “de Chesholme” and was chartered in Scotland in 1248.

is historically one of the largest and most powerful of the Highland clans. The earliest Campbell is believed to be Gilleasbaig of Menstrie in the 1260’s.

is one of the largest clans with numerous branches. Chartered in 1250, MacDonald is allies with Clans Cameron and Stewart.

is the premier clan among Scottish Gaels. It is the first clan to be recognized by the ScottishParliament.

comes from the Gaelic Mac a’ Phearson meaning ‘Son of the Parson’. Their most common tartans are red, hunting and dress.

is a Highland Scottish clan. Their crest features a pelican feeding her young. The Stewart tartan is the official tartan for the Royal House of Scotland.

Check out the Highlander

The Highlander is St. Andrew’s quarterly publication. Our archive of Highlanders can be found on https://issuu.com/saslions.

Our Mission: St. Andrew’s, an independent college preparatory school dedicated to personalized student development, strives to develop engaged, well-rounded individuals by inspiring a passion for knowledge, a commitment to personal integrity and a deepened social consciousness within a supportive educational community.

During the 70’s, the church’s governing body had determined that the city was in need of another quality college preparatory school. Business leaders and parents worked together to secure a site for a new campus and to raise money for the buildings. It was decided that the school should be named St. Andrew’s on the Marsh to reflect a Scottish heritage and the island setting. The church agreed to relinquish the school so that it could become an independent, nonprofit institution governed by a board of trustees.

From its inception, St. Andrew’s has been a family oriented institution. In November of 1978, when the time came to move from the downtown location to Bell Hall and Compton Center on the new campus, students, faculty, parents and administrators did the actual moving. By 1986, the third building on campus, Skinner Hall, was opened following a successful capital campaign.

In 2002 the school purchased the adjoining property on the north side of Betz Creek, which had been the Islands YMCA. Following year-long renovations to the building, the doors opened on a brand new Early Childhood Center.  And soon after, a first-class athletic field house complete with additional classroom space, was added to the school’s footprint.

Despite expanding facilities, programs, and technology, the fundamental principles of the school have remained unchanged. Our lower school inspires passionate learners, the middle school provides unique and diverse opportunities for all students, and the St. Andrew’s upper school encourages students to explore their interests and talents.

Election to the board of trustees carries with it a responsibility of stewardship. By definition, trustees are the custodians of the school: They hold “in trust” the mission and the school’s reputation. Current trustees accept the obligation to not only preserve, but to also add to the enterprise. In purview, trustees, even those who currently have children in the school, have responsibility to create “their children’s children’s school.” The work of trustees begins with fiduciary expectations of duty (due diligence on financials), care (executing decision by the standard of a “prudent” person), and obedience (to laws and bylaws). Beyond these duties, the work of trustees focuses exclusively on policies and strategies that are future-focused, and not on daily operations, which are delegated to the head of school. Trustees are called upon to contribute their time, thought, and energy, as well as financial resources, to support the viability and growth of the school.

The Lower School at St. Andrew’s welcomes applications from prospective Lower School teachers for the 2020-2021 school year. A resume, cover letter, and a minimum of three references should be included in inquiries sent directly to Anne Weisel, Head of Lower School, at weisela@saslions.com.

The Middle School at St. Andrew’s welcomes applications from prospective Middle School PE coaches and Middle School Athletic Directors for the 2020-2021 school year. A resume, cover letter, and a minimum of three references should be included in inquiries sent directly to Jesse Lazzuri, Head of Middle School, at lazzurij@saslions.com.

The Middle School at St. Andrew’s welcomes applications from prospective Spanish teachers for the 2020-2021 school year. A resume, cover letter, and a minimum of three references should be included in inquiries sent directly to Jesse Lazzuri, Head of Middle School, at lazzurij@saslions.com.

The Upper School at St. Andrew’s welcomes applications from prospective IB Biology/Biology teachers for the 2020-2021 school year. A resume, cover letter, and a minimum of three references should be sent directly to Ryan Martin, Head of Upper School.

The Upper School at St. Andrew’s welcomes applications from prospective strength and conditioning teachers for the 2020-2021 school year. A resume, cover letter, and a minimum of three references should be sent directly to Ryan Martin, Head of Upper School, and/or Doug Dixon, Athletic Director.

To apply, please send a letter of interest and resume to Beth Brodley, Business Manager at brodleyb@saslions.com .  If asked to interview for the position, we will also ask for 3-5 professional references.

Interested candidates should contact Anne Weisel, Head of Lower School, weisela@saslions.com and include a cover letter, resume, and a minimum of three references.

The school maintains a list of available substitute teachers.  All substitute teachers must have a college degree.  Teaching experience and/or certification is desirable.  Interested applicants should send a resume and cover letter to Ms. Christine Sapp at sappc@saslions.com for review.

Apple recognizes outstanding schools and programs worldwide for innovation, leadership, and educational excellence. We’ve learned from our schools that there are Five Best Practices that sustain a successful one‑to‑one implementation.

STEM Education and Leadership is to prepare 21st Century K-12 STEM educators and leaders to teach and disseminate new integrated approaches to STEM teaching and learning to benefit students.